Grand Slam tennis is back: but not as we know it.

For the first time since the world was gripped by the coronavirus pandemic, one of the four major tournaments is taking place when the US Open starts in New York on Monday.

Several top names will not be playing at Flushing Meadows, although there is still plenty of star power in the form of Serena Williams, Novak Djokovic and Andy Murray.

However, they will be competing in front of empty stands at what is usually a buzzing Billie Jean King National Tennis Centre.

The event is taking place inside a ‘safety bubble’ which includes rigorous testing and restrictions on movement of the players, their support staff and tournament officials.

It follows immediately after the Western and Southern Open, which is usually held in Cincinnati but moved to Flushing Meadows to create a two-tournament bubble.

“This is a really tough test for all the players. This is a US Open that we have never seen before,” tournament director Stacey Allaster told BBC Sport.

“I’m inspired by the opportunity our sport has, we’re the largest international sport to return to the global stage.”

Who’s playing and who’s not?

Being allowed to put on a tournament in a city that was once the global hotspot for Covid-19 cases was the first obstacle for the United States Tennis Association. Organising a safe event that would convince the world’s best players to attend was another.

Defending champions Rafael Nadal and Bianca Andreescu are the highest-profile absentees because of their health and travel concerns, along with Australian women’s world number one Ashleigh Barty and Wimbledon champion Simona Halep.

The women’s field, in particular, has been weakened by the withdrawals, with only four of the world’s top 10 set to play.

One of the most vocal opponents to playing the tournament was Australian Nick Kyrgios, who said he was “sitting it out for the people”.

Another notable absentee is Swiss great Roger Federer, who is recovering from knee surgery.

The absence of Nadal and Federer gives an opportunity to men’s world number one Novak Djokovic to close in on his rivals in the quest for the most Grand Slam titles.

Remarkably, it is the first Grand Slam where neither Nadal nor Federer are playing since the 1999 US Open.

As well as leaving the door ajar for Djokovic, it is also increases the chances of a first man outside the ‘Big Three’ winning a Grand Slam since Stan Wawrinka’s 2016 US Open victory.

Austria’s Dominic Thiem will be seeded second as he looks to go a step further than his defeat by Djokovic in the Australian Open final, with 2019 runner-up Daniil Medvedev, Greece’s Stefanos Tsitsipas and Germany’s Alexander Zverev also chasing maiden wins.

An asterisk against the champions?

The many absences have led to questions over whether record books will show an asterisk next to the winners’ names.

American Serena Williams, bidding for a record-equalling 24th Grand Slam title, says there will always be a footnote next to the tournament – but that victories will not be devalued by the circumstances.

“If you win, it was, like, ‘wow, I was able to win in this crazy circumstance where there was no fans. It was just so sterile and weird, but I mentally came through’,” said the 38-year-old, who lost in the Western and Southern Open third round this week.

Williams is one short of Australian Margaret Court’s all-time record of Grand Slam singles titles, but has lost her past four major finals – at Wimbledon and the US Open in 2018 and 2019 – as she appeared burdened by the weight of history.

The women’s singles draws have been wide open in recent years, with 11 different champions in the past 13 Grand Slams.

Former world number one Andy Murray is the star British attraction as he continues to resurrect his career following hip surgeries.

The 33-year-old Scot is now ranked 134th in the world and reached the last 16 at the Western and Southern Open, which was his first top-level tournament since November because of niggling injuries and the suspension of the ATP Tour.

British women’s number one Johanna Konta, seeded ninth, reached the quarter-finals at Flushing Meadows last year and goes into the tournament on the back of reaching at least the semi-final at the Western and Southern Open.

She will face fellow Briton Heather Watson in the first round.

Dan Evans, Britain’s highest-ranked man, will be seeded 23rd, while Kyle Edmund and Cameron Norrie are the other Britons in the singles.

Jamie Murray and Neal Skupski will look to better last year’s run to the men’s doubles semi-finals, while Joe Salisbury and his American playing partner Rajeev Ram are bidding for back-to-back Grand Slam titles after winning the Australian Open. No British players are in the main draw of the women’s doubles.

How are players staying safe?

Every person within the bubble has been twice tested for coronavirus on their arrival, with no player yet to record a positive test.

If a player tests positive during the US Open they will be withdrawn from the event in line with New York State guidelines.

Most players are staying in one of two hotels in Long Island, although Djokovic and Williams are among the few to hire private residences.

Those homes have 24-hour security – paid for by the player – to ensure the bubble rules are not broken.

Line judges have been replaced by an electronic system on all courts except for the Arthur Ashe and Louis Armstrong show-courts, while matches will have three ball kids instead of the usual six.

There are no qualifying rounds or mixed doubles, with the men’s and women’s doubles reduced to 32 teams and the wheelchair events taking place after initially being omitted by the USTA.

And, of course, the big thing missing is the fans.

“It just feels a bit sad that there’s no fans watching the matches,” said 2012 champion Murray.

“It’s nice walking through to your practice courts, not getting stopped or anything, but then the atmosphere is just not the same without the people.” 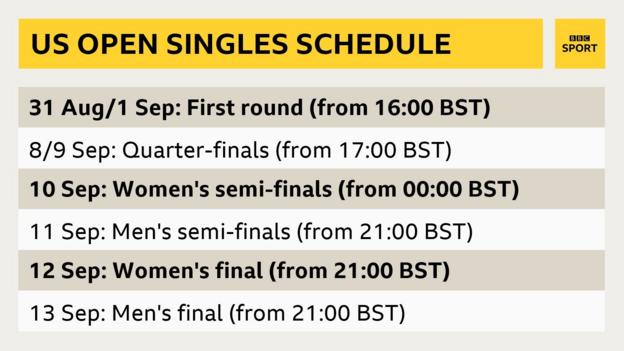 Virginia couples challenge laws requiring them to declare their race