No Result
View All Result
Home US

US election 2020: A really simple guide

The president of the United States of America has a huge influence on how the world responds to international crises, such as wars, global pandemics and climate change.

So when the election comes round every four years, there’s a lot of interest in the outcome but not a lot of understanding about how the process works.

Even here at BBC News, we have to remind ourselves how the electoral college works and what a battleground state is.

So if you’re looking for a refresher or trying to understand it for the first time, this simple guide to the US election will help.

When is the election and who are the candidates?

The election for president always falls on the first Tuesday after the first Monday in November, meaning this time around it’s on 3 November.

Unlike many other countries, the US political system is dominated by just two parties, so the president always belongs to one of them.

The Republicans are the conservative political party in the US and their candidate in this year’s election is President Donald Trump, who is hoping to secure another four years in power.

The Republican Party is also known as the GOP, or the Grand Old Party. In recent years, it has stood for lower taxes, gun rights and tighter restrictions on immigration. Support for the party tends to be stronger in more rural parts of America. Former Republican presidents include George W Bush, Ronald Reagan and Richard Nixon.


The Democrats are the liberal political party in the US and their candidate is Joe Biden, an experienced politician best-known for serving as Barack Obama’s vice president for eight years.

The Democratic Party is best defined by its liberal stances on issues like civil rights, immigration, and climate change. It believes government should play a bigger role in people’s lives, like providing health insurance. Support for the party tends to be stronger in urban parts of America. Former Democratic presidents include John F Kennedy and Barack Obama.


Both men are in their 70s – Mr Trump would be 74 years old at the start of his second term, while at 78, Mr Biden would be the oldest first-term president in history.

How is the winner decided?

The winner is not always the candidate who wins most votes nationally – as Hillary Clinton found out in 2016.

Hillary Clinton was Donald Trump’s opponent in 2016. She ended up winning nearly three million more votes than Mr Trump, mainly because she picked up a high number of votes in strong Democrat states like New York and California. However, her rival comfortably beat her in the electoral college race 304 to 227 because he won several tight contests in key states.

Like most voting systems, the electoral college has a number of pros and cons but it is widely respected because of its historical roots in the founding of the US. It usually reflects the popular vote, but it has failed to in two of the last five elections, including when Donald Trump won in 2016.


This means that when someone votes for their preferred candidate, they’re voting in a state-level contest rather than a national one. 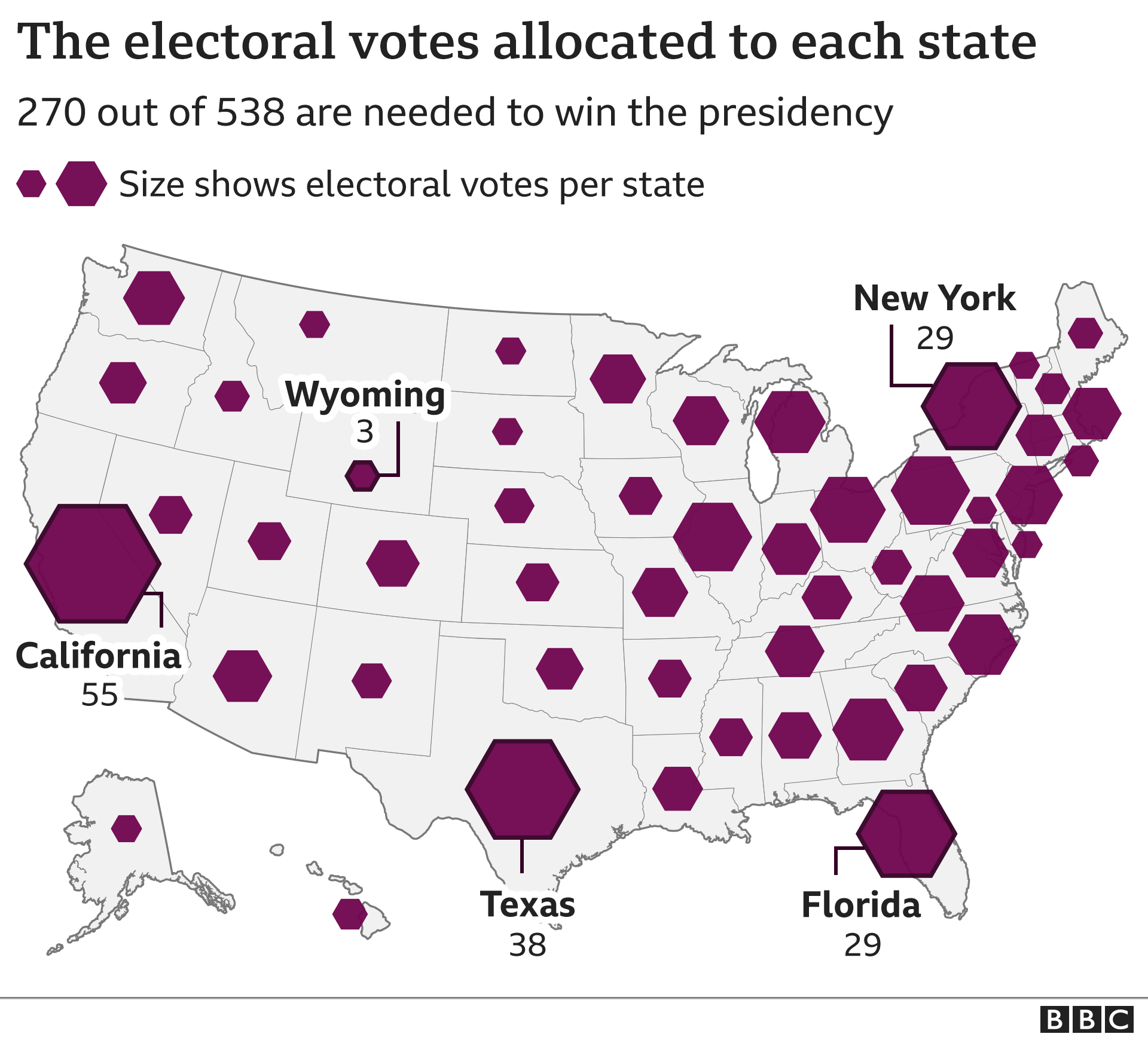 All but two states have a winner-takes-all rule, so whichever candidate wins the highest number of votes is awarded all of the state’s electoral college votes.

Most states lean heavily towards one party or the other, which means the candidates focus their efforts on a dozen or so states where either of them could win. These are known as the battleground states.

These states, which are often referred to as swing states as well, are where voters are split relatively evenly between Democrats and Republicans. Traditional battleground states include Florida and Ohio. Other states that have been strongly Republican in the past, like Arizona and Texas, are considered battlegrounds in 2020 due to increasing support for the Democratic Party.

Who can vote and how do they do it?

If you’re a US citizen and you’re 18 or over, you should be eligible to vote in the presidential election.

In 2016, about 245 million people were eligible to vote, but fewer than 140 million people actually did. According to the US Census Bureau, the majority of people who didn’t register to vote said they just weren’t interested in politics. Those who registered but didn’t actually vote said they didn’t like the candidates.

End of eligible to vote


However, lots of states have passed laws requiring voters to show identification documents to prove who they are before they can vote.

These laws are often put into place by Republicans who say they’re needed to guard against voter fraud. But Democrats accuse them of using this as a form of voter suppression as it is often poorer, minority voters who are unable to provide ID like a driving licence.

States also have different rules on whether prisoners can vote. The majority of them lose their right to vote when they are convicted but regain that right when they have served their sentence.

Most people vote at a polling station on election day, but alternative methods of voting have been on the rise in recent years. In 2016, 21% of those who voted did so by post.

How people vote is a contentious issue this year because of the coronavirus pandemic. Some politicians are calling for wider use of postal ballots, but President Trump has said – with very little evidence – that this could result in more voter fraud.

Critics say postal ballots are susceptible to fraud – and there have been isolated incidents involving Republicans and Democrats – but numerous nationwide and state-level studies have found no evidence of any widespread fraud.

Is the election just about who is president?

No. All of the attention will be on Trump v Biden, but voters will also be choosing new members of Congress when they fill in their ballots.

Congress is the part of the US government that writes and passes laws. It’s made up of two chambers – the House of Representatives and the Senate. Members of the House serve two-year terms while senators serve six-year terms and are split into three groups, meaning a third of them are up for election every two years. 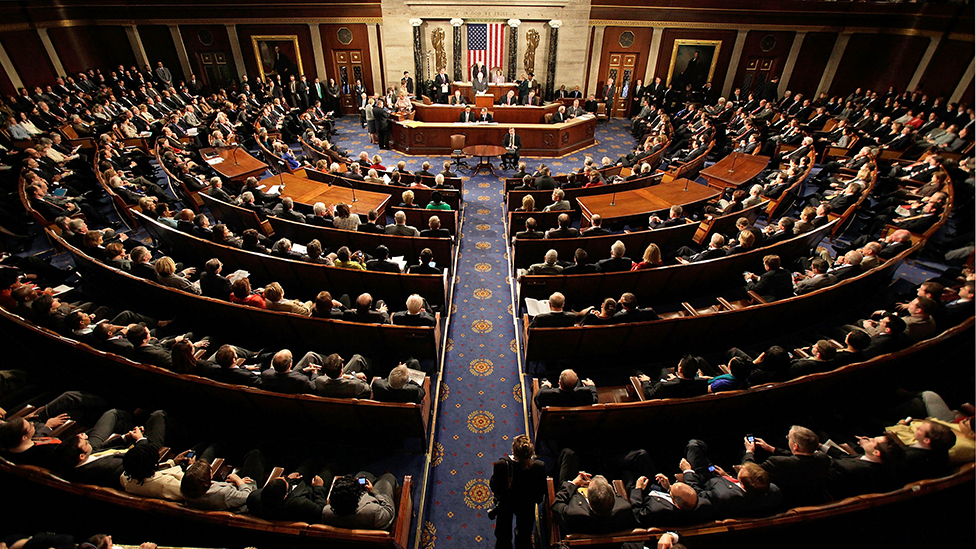 If they had a majority in both chambers they would be able to block or delay President Trump’s plans if he were to be re-elected.

All 435 seats in the House are up for election this year, while 33 Senate seats are also up for grabs.

When will we find out the result?

It can take several days for every vote to be counted, but it’s usually pretty clear who the winner is by the early hours of the following morning.

In 2016, Donald Trump took to the stage in New York at about 3am to give his victory speech in front of a crowd of jubilant supporters.

But don’t set your alarm clocks just yet. Officials are already warning that we may have to wait longer – possibly days, even weeks – for the result this year because of the expected surge in postal ballots.

There are two ways to vote in the US – by going to a polling station on election day or by using a postal ballot – but the rules vary depending on which state you are in. All states offer some form of voting by post, but many require you to provide a reason for not being able to vote in person on election day. Some states are accepting the coronavirus as a valid reason to use a postal ballot, but not all of them are at the moment.


The last time the result wasn’t clear within a few hours was in 2000, when the winner wasn’t confirmed until a Supreme Court ruling was made a month later.

In 2000, the race between Republican candidate George W Bush and Democratic candidate Al Gore was so close that it came down to the result in Florida, where just a few hundred votes separated them. There were weeks of legal battles, which triggered a recount, but eventually the Supreme Court stepped in. Mr Bush was declared the winner, giving him all 25 of Florida’s electoral college votes and leaving him with a winning total of 271 overall. Mr Gore, who won more votes nationally than Mr Bush, conceded defeat.

End of a Supreme Court

When does the winner take office? 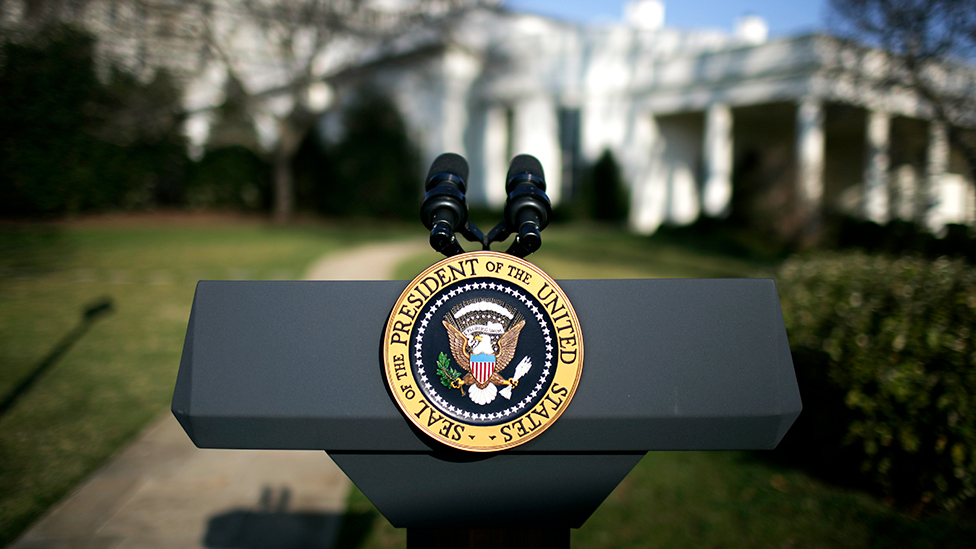 If Joe Biden wins the election, he wouldn’t immediately replace President Trump as there is a set transition period to give the new leader time to appoint cabinet ministers and make plans.

The new president is officially sworn into office on 20 January in a ceremony known as the inauguration, which is held on the steps of the Capitol building in Washington DC.

After the ceremony, the new president makes their way to the White House to begin their four-year term in office.

Putin says he could send police to Belarus if necessary

We asked for your first Covid text messages. These are your stories

Putin says he could send police to Belarus if necessary

Man arrested in London on suspicion of Liberia war crimes

The Chieftaincy and Religious Minister, Ebenezer Kojo Kum has asked for support from leaders of the Muslim...