Ghana and Nigeria engulfed in a diplomatic row

There is a diplomatic row brewing between Ghana and Nigeria, two West African nations with historic ties.

The simmering tension stems from treatment some Nigerian citizens in Ghana are being subjected to.

Some Nigerian citizens resident in Ghana have in recent times been arrested over a number of criminal activities.

Three Nigerian citizens were part of a gang that kidnapped two Canadian volunteers, Lauren Tilley and Bailey Chitty in Kumasi.

The Nigerians with five other Ghanaians were however arrested in a rescue effort by Ghanaian police officers.

Two Nigerians are also in custody over the kidnapping of three girls in Western Ghana who are yet to be found after almost a year.

Five Nigerians who raped a woman in the course of their robbery operation at a town called Tema were also arrested by Police last Friday.

The most recent criminal activity involving a Nigerian in Ghana was attempted kidnapping of a 4-year-old boy at Mamobi, a suburb of Accra over the weekend.

The development has made some Ghanaians a bit apprehensive about citizens from Nigeria.

Tension between the two nationals reached a crescendo when a group of unidentified men forcibly closed down 20 spare parts shops belonging to Nigerians at the Suame Magazine in Kumasi, Ghana’s second biggest city.

Chairman of the Nigerian Union of Traders Association, Chief Kizito Obiora attributed the development to the involvement of their nationals in the recent kidnappings in Ghana.

The Nigerian High Commission in Ghana has taken an exception to the developments.

In a strongly worded statement signed by Ambassador Micheal Olufemi Abikoye, the commission laid the blame squarely on the doorstep of the media for painting all Nigerians living in Ghana as criminals.

The statement read that “Suffice to say that at times like this, a situation where five (5) Ghanaians in company of three (3) Nigerians allegedly kidnapped two (2) Canadians but seems to enjoy wider press coverage as a crime committed by the Nigerians and considers Ghanaians only as accomplices leave much to be desired on the objectivity of such report.”

“In light of the above, the High Commission wishes to appeal to the local traditional media and social media to be highly circumspect in such reportage.”

“In effect, the ongoing media trial of the criminals which was now being turned media trial of Nigeria as a country, calls for moderation on the part of media practitioners in Ghana. Moreover, such media trials could be seen as prejudicial to the outcome of the ongoing prosecution in court which sees them as innocent until proven guilty.” 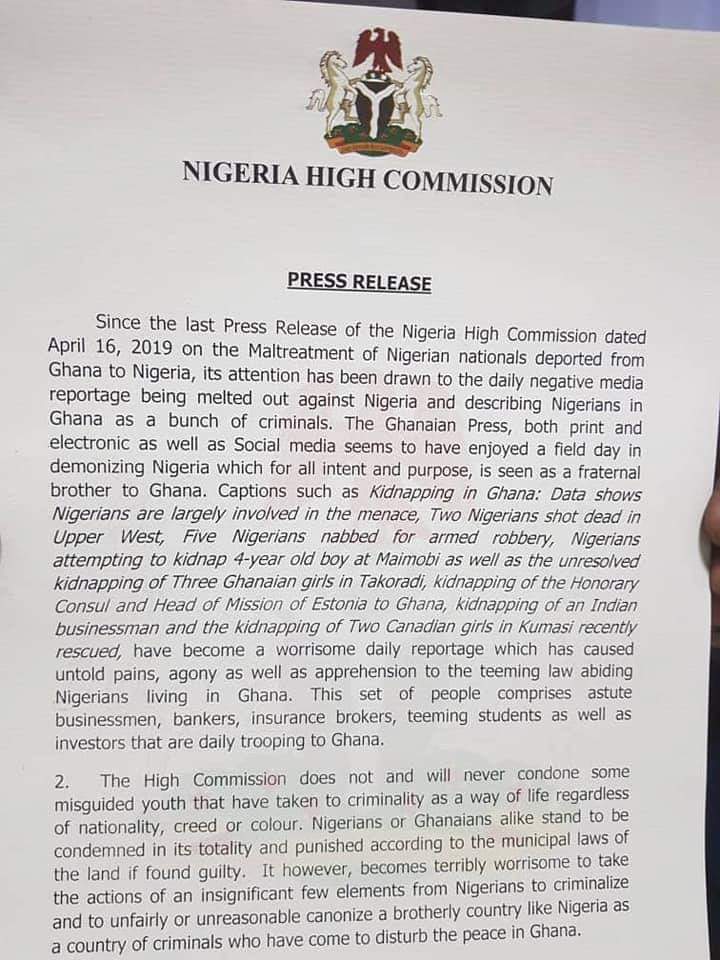 “On this note, the Nigeria High Commission wishes to reiterate its stand that whoever commits crime and is found guilty must face the consequences of his/her action. On its part, the High Commission will continue to mobilize all Nigerians living in Ghana to obey the domestic laws. The High Commission is also in touch with all relevant host authorities with a view to amicably resolve the issue”, the statement assured.

The statement further cautioned media to desist from stoking tensions in order not to trigger reprisal attacks on Ghanaians resident in Nigeria as well.

“This has become highly imperative in view of its larger implications on Nigerians living in Ghana and Ghanaians living in Nigeria as well.

Moreover, the excellent relations that subsist between Nigeria and Ghana as maternal brotherly countries under His Excellency, President Muhammadu Buhari and his brother, President Nana Dankwa Akufo-Addo can never be allowed to be jeopardized by xenophobic tendencies over such intents”. 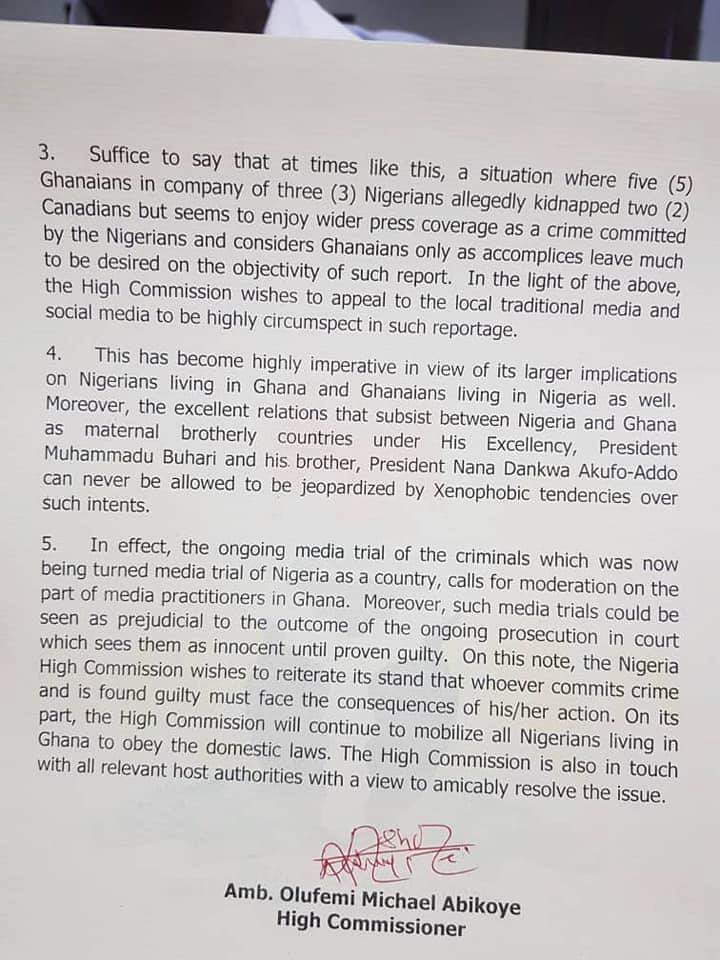 The Committee on Foreign Affairs and Regional Integration of Ghana’s Parliament has taken steps to intervene to douse the tension between the two nations.

The committee has invited the Nigerian High Commissioner to Ghana Ambassador Micheal Olufemi Abikoye over the matter.

Speaking to Africafeeds.com a member of the committee Samuel Okudzeto Ablakwa called for calm on both sides, underscoring the importance of peaceful coexistence between citizens of the two countries.

He disclosed that over 2 million Ghanaians are currently resident in Nigeria according to official figures with 7 million Nigerians also currently living in Ghana.

Meanwhile a Nigerian Visiting Professor to the University of Education Winneba Professor Austin Nwagbara has been arrested by the Ghanaian police for questioning.

This follows a viral video in which the Professor is heard inciting Nigerians living in Ghana against the natives.

Professor Austin is also heard talking down Ghana’s educational system describing it as inferior to that of his native Nigeria.

The Professor was addressing a group Nigerians in Ghana on strategies to deploy in changing the negative narratives that have characterized the image of Nigerians living in Ghana.

The University of Ghana where Professor Austin Nwagbara was a visiting scholar at the Department of English during the 2011/12 academic year has issued a statement dissociating itself from his utterances.

“The University of Ghana disassociates itself from the claims of Professor Austin Nwagbara makes in the video which we find as mischievous and intended to mislead the public and harm the reputation of the university.

The public is advised to treat the contents of the said video with the contempt it deserves”, the statement from management of the University of Ghana said.

Management of the University of Education Winneba, UEW in Central Ghana has equally announced the visiting Professor will be invited to answer questions regarding his comments in the viral video.

Public Relations Officer for the University Ernest Azutiga who describes the comments as “overboard” has disclosed a committee will be set up to investigate the matter.

The tension between the two countries started with deportation of some Nigerians by Ghana early this year.

In February some Nigerians attacked officials of the Ghana Immigration Service at Kasoa in the Central region of Ghana.

The officers who had visited the community to inspect documents of migrants were stopped by a group of Nigerians who mounted a roadblock.

The suspects together with others were later deported. In February, 2019 a total number of 723 Nigerians were deported for engaging in Cybercrime, Prostitution and lack of requisite resident documents.

The Federal Government of Nigeria however prostrated the deportation accusing government of Ghana of inhuman treatment of the deportees. In what seems like a reaction, Nigeria followed up with its own deportation of some Ghanaians resident in that country.

Four Ghanaians resident in Nigeria were early this month deported for falsifying documents.

Multi-talented saxophonist Suzy Eises and her band will be performing live at the El Barrio Tapas Bar...