‘I’m proud of Stonebwoy, he defended himself against a bully’ – Sam George

The legislator believes it was not wrong for the dancehall artiste to defend himself when he anticipated an attack.

Last Saturday’s VGMA was marred following a brawl between Stonebwoy and Shatta Wale on the stage.

Stonebwoy beat his rival to win the coveted Dancehall Artiste of the Year award, but the aftermath proved to be chaotic. 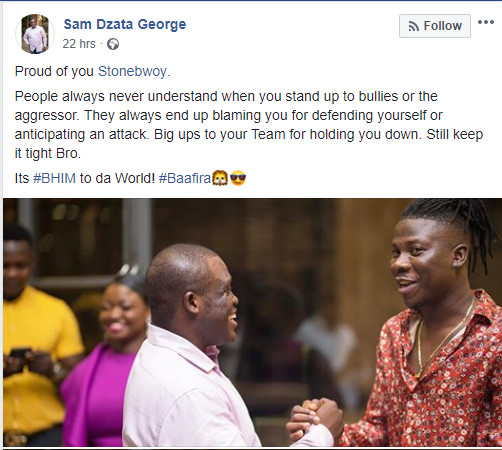 ‘I’m proud of Stonebwoy, he defended himself against a bully’ – Sam George

The “Shuga” hit maker was interrupted by Shatta Wale and his team while he mounted the stage to receive his award.

This sparked chaos on stage, with Stonebwoy captured on camera pulling out a gun during the brawl.

While many have condemned both artistes, Sam George believes Stonebwoy was right to defend himself.

“Proud of you Stonebwoy. People always never understand when you stand up to bullies or the aggressor,” the legislator wrote on Facebook.

“They always end up blaming you for defending yourself or anticipating an attack. Big ups to your Team for holding you down. Still keep it tight Bro.

Details of Stonebwoy and Shatta’s stage brawl happened; here's a rare footage that captured it all